Journey of my Life: So much of Pain yet it not went into the Vain! 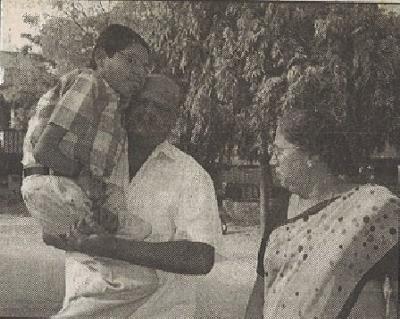 It has been said that nothing is Impossible in this Universe. For others it might be just a quote but in my case the destiny has chosen me to make it prove. It doesn’t matter that how many obstacles you have in the journey to success but the thing that matters is the courage that you have to cross those obstacles.

My parents & I always view from a point that myself is a differently abled child (and certainly not the disabled one). According to us Physical disability is not a problem when you have decided to move ahead. But for that you should require a clear vision to future.

It’s true that every life has its own Winter and Summer. The same way mine is full of lots of cheers and tears. And at last before the journey of my life commences, I would like to request each and every person that please please don’t take it that way that you are just reading an article of mine (say blog). Every child (whatever be the physic) has its own potentialities. The thing you require to do is to just envision and then sharpen it. Mark my words that very few things can give immense satisfaction as this one.

So now Ladies and Gentlemen may I have your attention please!

Journey of my life here begins:

I was a normal child with a healthy body up to age of five. Thereafter, due to frequent fever my parents consulted doctor. Blood test result showed that I had rheumatoid arthritis, in which I was suffering from high fever of 104-105 degree Celsius on alternate days. Thereafter, I had under gone an allopathic treatment, but due to its side effects my heart got enlarged. So, I took heart treatment. But after discharge when I returned home my difficulties increased.

My parents were working in general shift, so they used to take me to doctor immediately after returning home in the evening. After taking magnet therapy and physiotherapy we used to comeback home at 11.30 at night and had our meal thereafter. Again same programme from the next morning i.e. it was a daily routine. This continued for nearly 6 to 8 months. In that condition one of our neighbor had to stay with me as my attendant. During that period it was not possible to think about my education.

Then my parents took me to Hinduja Hospital in Mumbai for proper treatment and diagnosis. After taking treatment for 20 days it was decided to undergo operation. Then due to post-operative follow up treatment, it was decided to go for operation in Ahmedabad. Six operations were done on both of my legs; but the results were always negative.

During that phase I compromised with my life and situation and decided to divert my mind fully in education by all the ways. I was allowed to give 4th standard exam taken by Corporation directly, which I passed with 90% marks. Thereafter, I studied from 5th to 7th standard in Municipal School. As I was not in a position to go to school, this whole education was taken by calling teachers at home. In standard 10, I got 78% marks and with great difficulties I got admission in one near by school for standard 11th and 12th.
I cleared 12th board exam with 78 % marks.

After passing 12th, at the age of 18 years it was decided to take treatment of a well known orthopaedic doctor of Ahmedabad, for joint replacement. But the surgeon estimated the expense of Rs. 5 lacs and after spending such a big amount it was not even guaranteed that I shall be able to walk. So, I got admitted in Civil Hospital. As per the Doctors’ opinion, I would get normal but for that I’ll have to take treatment for one year in Civil Hospital. This hope was given by doctors but after admitting in hospital, due to mistake and carelessness of doctors I suffered from gangrene in one of my leg. Immediately I was shifted to one private hospital and my right leg was amputated from mid-thigh. The monetory expense was quite high but not as much as that of mental shock of suffering, which is beyond explanation. But, with the strength given by almighty God I decided to continue my studies, once again.

Due to the encouragement and inspiration given by My Parents, faculty members and some really great people I start doing course of Charted Accountancy (C.A.). Simultaneously I took admission in first year B.com. and with very hardwork I passed all the three years of commerce grduation with first class in first attempt. I had to do this whole study by keeping private tuitions.

In this period I was also facing difficulties of terminology because I had studied upto 12th standard in Gujarati medium and then I kept English medium in college. But with great efforts and hard work I maintained first class.

During studies from 5th to 9th standard my parents were leaving me alone at home while going for their services, and it is only through them that I learnt how to face and fight against problems in such difficult situations.

After operation of amputation of my leg, my independence was completely snatched away and I became totally dependant on others. As I have to remain continuously in sitting position, I have to face various difficulties.

In such difficulties I used to suffer dehydration also and in this period my studies suffered. Despite of all such difficult situations, I appeared in C.A foundation exam and cleared it at first attempt.

During 10th standard period, due to Earth Quake and its aftershocks in year 2001, my father had to leave his job. Because both my parents were doing service in general shift, leaving me alone at home which was on the first floor which was a bit risky. As during afternoon if any aftershock comes people used to run in open ground leaving their homes, but being totally dependant and alone at home I was getting mentally confused at that time. My father took note of this situation and after thinking seriously he left his job so that I may not feel any mental shock and I may not have to face any difficulties and thus he gave me full support. Treatment of any other disease may be simple but treatment of mental illness is very complicated.

After passing foundation, it was necessary for me to go to classes for Inter, so my father used to take me to classes. In such situation also I did not loose my courage and decided to go ahead in any way and at any cost, and with that determination I also passed Inter examination. In my success I got great support and co-operation of my parents, teachers and friends.

From 4th standard I have studied by keeping private tuitions and calling teachers and professors at home and in this also we have faced financial difficulties. I have also done course of French language. Moreover, I have a hobby in music. I have also passed three exams taken by Akhil Bhartiy Gandharva Mahavidyalaya in Vocal (Gayan) with first class and presently I am preparing for C.A. Final exam.

If definition of true Guru is to be given, then I consider all of my faculty members, right and proper, who have inspired an invalid boy like me to do something special in life and have made efforts to see that I make special place in society.

In the end I should really gratefull to my parents. They are the one who has made one disabled child into differently abled child. The contribution which I got from my father and mother is invaluable; I cannot express how valuable this contribution is. My parents suffered financial, physical, mental and all types of difficulties and hardships but they kept on inspiring me which gave lot of strength to me.

Thank you very much from the bottom of my heart for spending your good deal of time.

Join in and write your own page! It's easy to do. How? Simply click here to return to Share Your Success Story.

Do you like our Act On Your Dream! site?

Search Act On Your Dream!

Popular Pages
on our site...

What Do Dreams Mean?

My Top Tip
to Help You Succeed

This is the edition
I recommend...

Think and
Grow Rich!:
The Original
Version, Restored
and Revised

Personal development is one of the keys to your lasting success